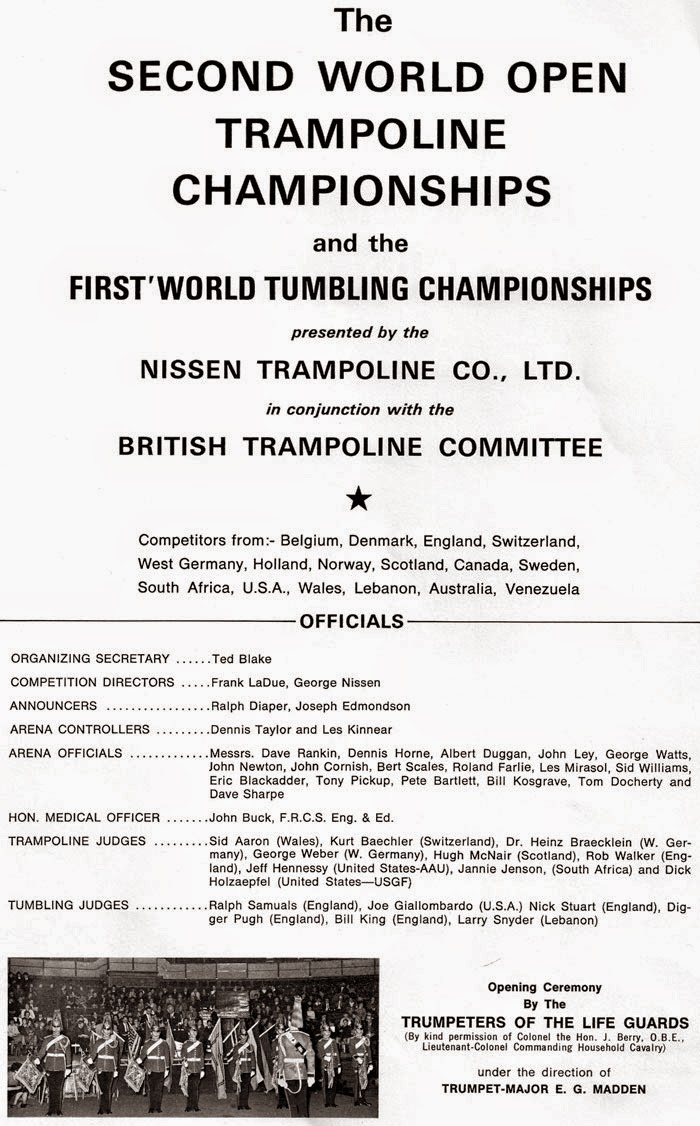 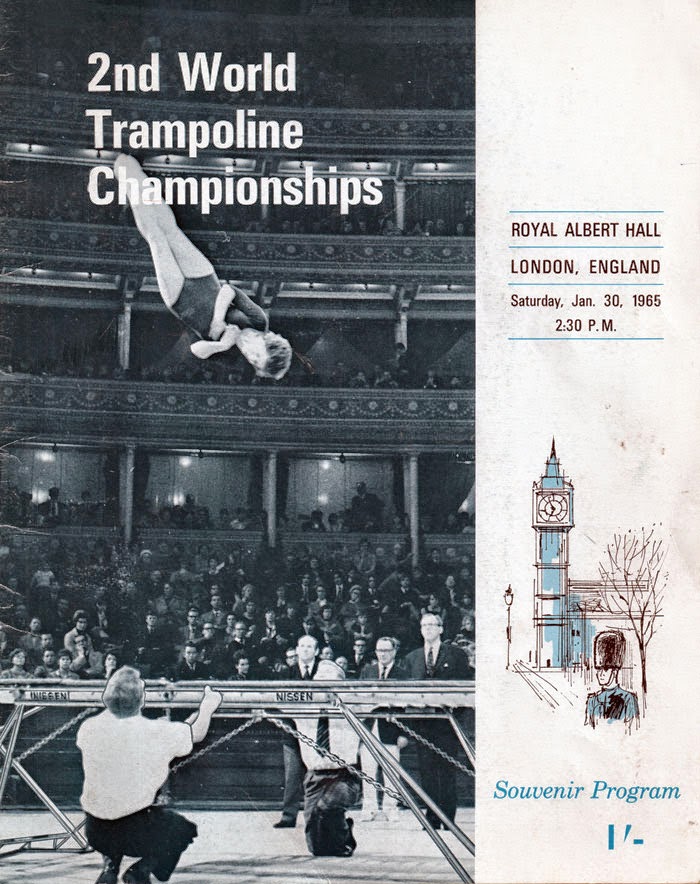 Notable "firsts" achieved at this event:


1. This was the first World Championship for tumbling.

2. Synchronized trampoline was held as an exhibition competition with expectations for it to become an official event in 1966.

4. Governing members of the newly formed International Trampoline Federation (F.I.T.) were in attendance.


Competitors were matched against each other in pairs and entered into a modified double elimination tournament. Winners of the first round continued on through the Championship bracket. Losers in the first round automatically went into the Class B consolation bracket. Competitors were seeded on the basis of ratings on other information supplied by their national associations. An optional 10-bounce routine was required from each competitor. 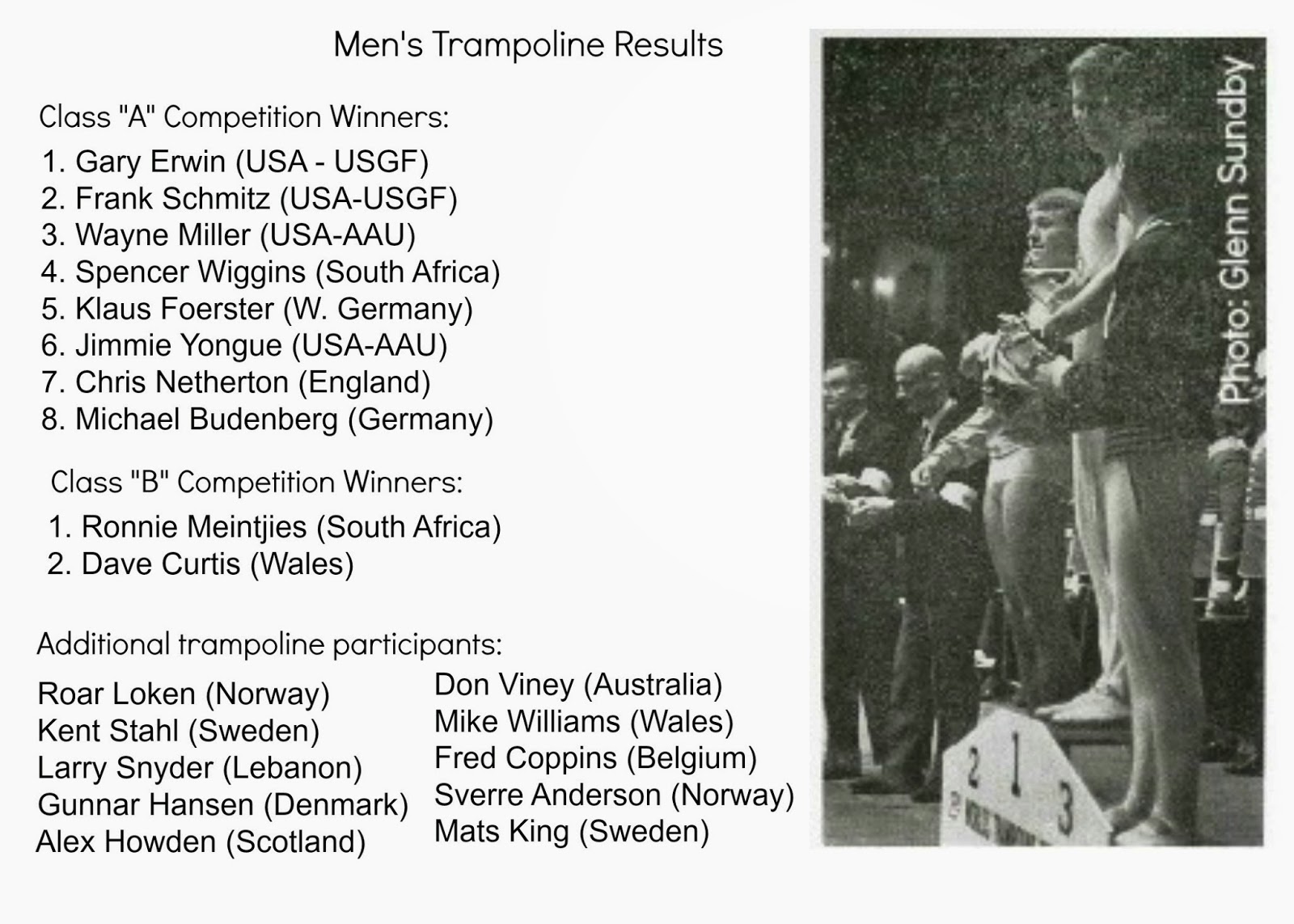 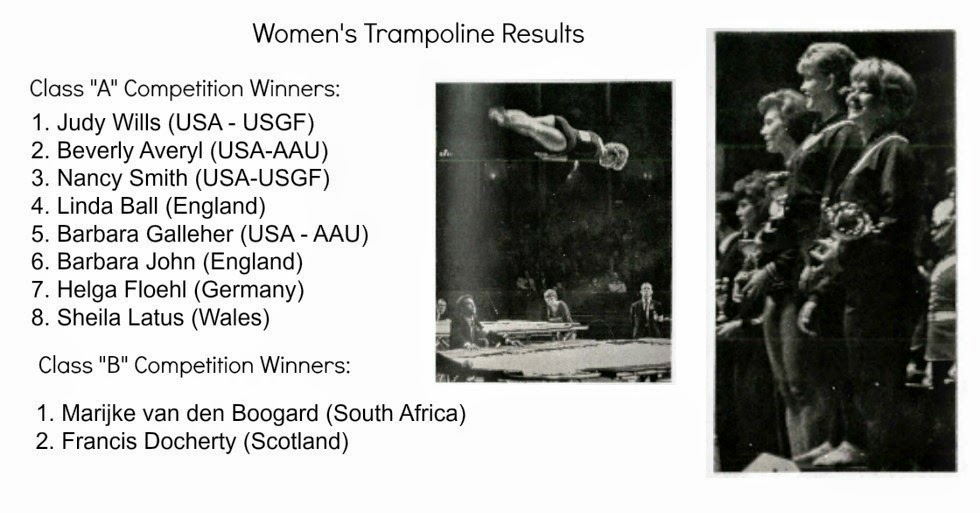 At the conclusion of the trampoline and synchronized events the 1st World Tumbling Championships commenced. The same modified double elimination tournament rules used for trampoline were applied to tumbling. Each tumbler was required to execute two routines down the mat in each match, and his performance was judged against that of his opponent's following each pass. The first pass must contain predominately forward movements and the second predominately backward movements. In case of a tie, a third optional routine was required. 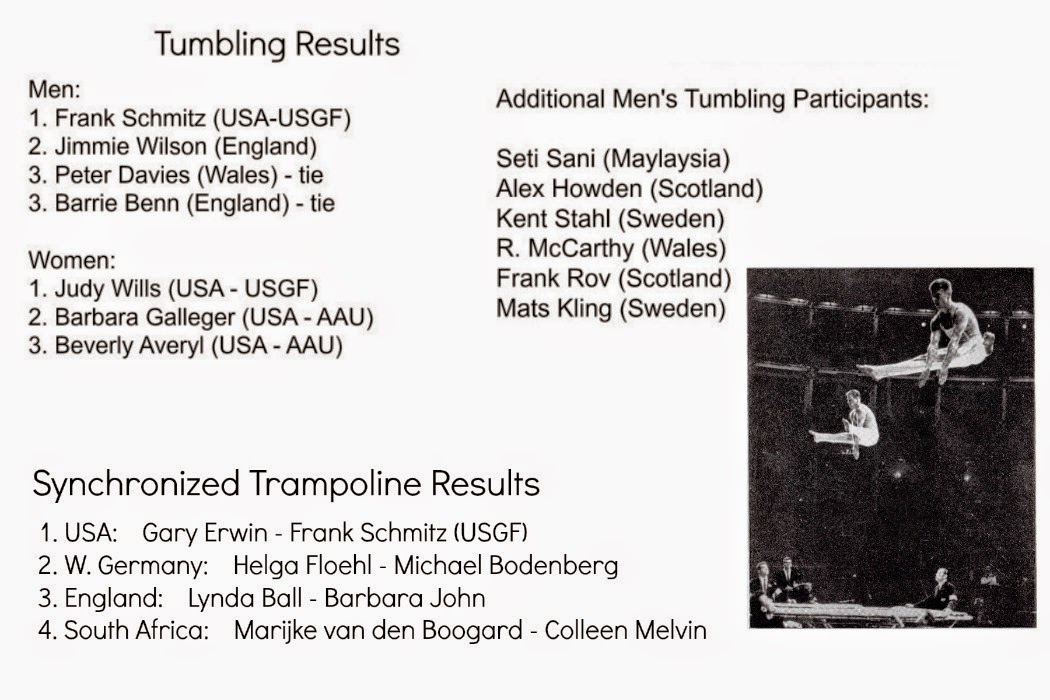 Having trouble viewing this video? Use this YouTube link instead.

Axial Rotation System:
"The system evaluates individual stunts and combinations and assigns a numerical "grade" for each on the basis of difficulty. The difficulty is determined by the degree of rotation about a body axis. For example, a front drop, or 1/4 rotation = 1 point. For each additional 90 degrees of lateral rotation the rotation value increases 1 point. A forward somersault (360 degrees) = 4 points. For a twisting somersault (rotation around the longitudinal axis & the lateral axis combined) the value increases 1 point for each 1/2 twist (180 degrees) and 1 point for each 1/4 somersault (90 degrees) for a total value of 6 points."

"Bonus points are added to the basic rotation value if the takeoff or the landing is made from the front or backdrop position rather than the feet."

"When stunts are placed in combination (a routine) the value of one stunt (B) is influenced by the value of the one proceeding it (A). Thus the combination value is determined by a process of multiplication:"
Stunt B = Stunt B + (Stunt A x Stunt B)
10 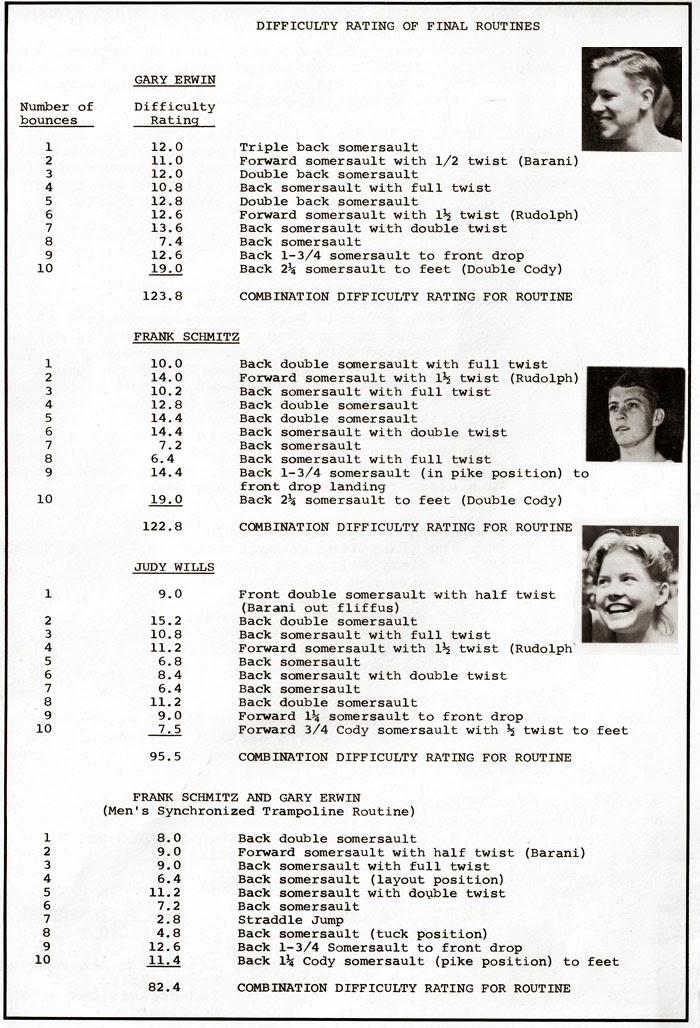 Three Cheers for Ted Blake!
Sir Winston Churchill, Prime Minister of the U.K., died on January 24. Queen Elizabeth promptly decreed his funeral be held on Saturday, January 30th...which happened to be the SAME day as the scheduled World Championships!

This unexpected challenge could have pushed  any other ordinary competition organizer into a tailspin. But in true "Ted Blake form,"  he managed to retain all hotel bookings, shuttle competition participants between venues as well as fill the Hall with 2,000 enthusiastic spectators.

Once again, producing a spectacular show for all!