The Royal York Hotel in downtown Toronto, served as competition headquarters for the 218 competitors along with their coaches and family who arrived from the US, Canada, South Africa and Great Britain. Since the competition was to take place during the Canadian National Exhibition (CNE), and was held in the Outdoor Sports Complex on the CNE grounds, Ron Munn knew he faced a major transportation challenge. However, he successfully resolved the issue by renting several large tour buses to transport the entire group to and from the Outdoor Sports Complex twice each day.


Preliminary competition took place on the 15th and 16th, and consisted of optional routines in all events with the top six in each event advancing to the Finals on Sunday, the 17th. Highlights of the competition included a visit by USA-NASA astronaut, Scott Carpenter, and the debut of a new trampoline skill by Stuart Ransom - - a 1-1/2 twisting triple somersault, with a half twist in the second somersault and a full twist in the third!

Following the Finals, a special Awards Banquet was held at the Royal York Hotel. The evening was topped off by a delightful comedy trampoline performance by "The Rebounders," (Rick Kinsman and Leslie Sguigna).


In addition, throughout the three-day event participants enjoyed themselves on the CNE grounds which offered many side attractions for everyone attending this 3rd World Age Group Games. 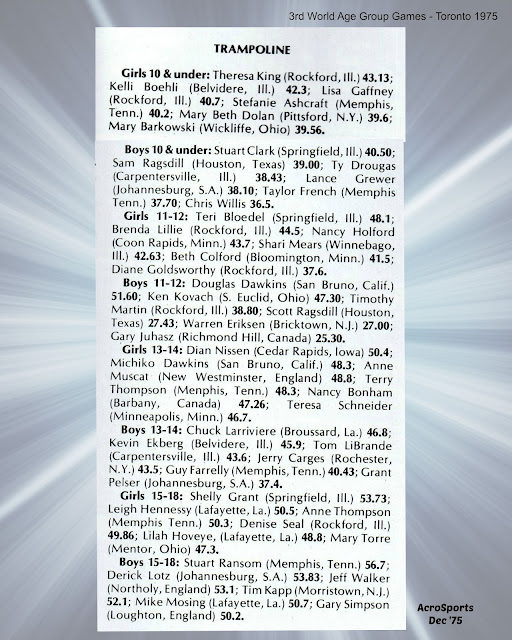 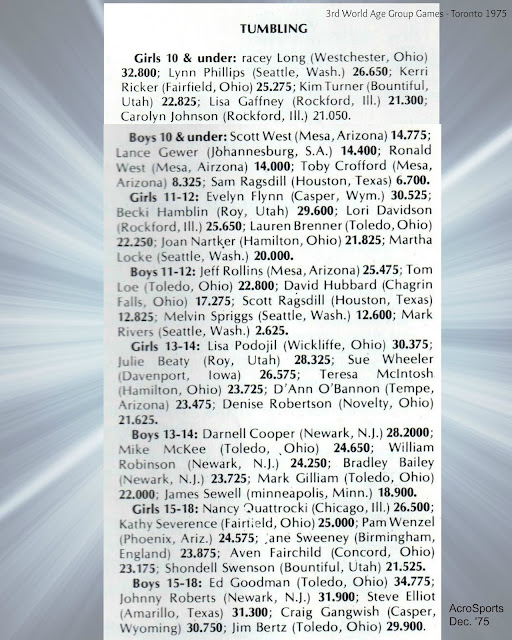 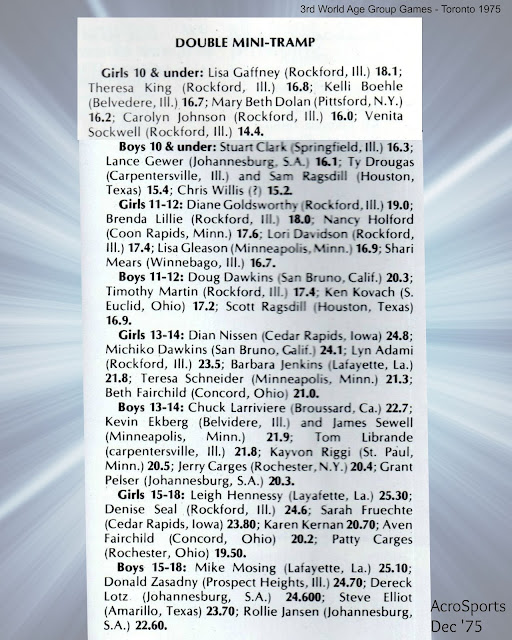 “Many people helped to make the competition the success it was, but special thanks must go to the Ontario Gymnastics Federation and its Trampoline Committee. Also, special thanks to the Canadian Gymnastics Federation for the necessary sanction to conduct the competition. Lastly, the largest appreciation goes to the Canadian National Exhibition and Gordon Walker, Sports Stadium Manager for helping to sponsor the entire competition and providing the necessary facilities.”
Ron Munn, Meet Director