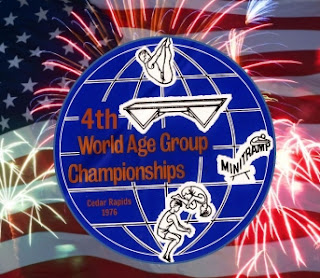 BUT WAIT! Let's tell this story from the beginning...

Because WHO attended, HOW they got to Cedar Rapids
and WHAT they did, is the REAL story of the
1976 - 4th World Age Group Games!

1976 was a significant year for the USA, for it marked the 200th anniversary of the adoption of the Declaration of Independence and the creation of the United States of America as an independent republic.

Across the country, Americans were in a celebratory mood and open to extending a helping hand.


Meanwhile, the organizers of the 4th World Age Group Games rode in on a wave of good luck and good planning to host not only a successful competition, while also providing athlete transport, lodging, and entertainment in a manner that could not be duplicated in today's world.

The sequence of events:

Holding the World Age Group Games in the week following the 9th World Trampoline Championships taking place in Tulsa, Oklahoma, gave overseas athletes and coaches the unique opportunity to attend both events during a single trip to America.

To sweeten the pot, George Nissen made arrangements with Ozark Airlines, to schedule a special charter flight for the express purpose of transporting everyone from Tulsa to Cedar Rapids. During the flight, Ron Munn and his staff issued name tags to all aboard while explaining that families from Cedar Rapids would be waiting on the tarmac - - with a matching name tag.

Why the name tags?

It seems that among the multitude of bi-centennial celebrations, Americans were also being encouraged to open their homes to visiting foreign tourists and further share the "American experience." This was perfect timing for George Nissen, Ron Munn, and their World Age Group Games staff - - who contacted the Cedar Rapids Chamber of Commerce - - and were met with full cooperation to help coordinate housing for 120 athletes.

Host-families were selected and eagerly volunteered to provide meals, lodging, and transportation throughout the week in exchange for the opportunity to share good old American hospitality and create life-long friendships.

As 120 athletes representing thirteen countries stepped off the Ozark flight and onto the red carpet they were greeted by the Honorable Mayor of Cedar Rapids, Don Canny, the Mt. Vernon Marching Band, and a throng of host-families - - each looking for a matching name tag. 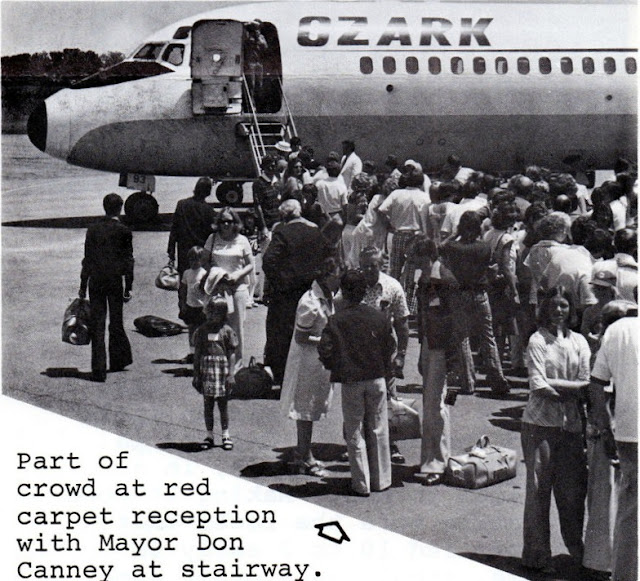 Besides allowing serious workout time to trampoline and tumble, the week's itinerary included: 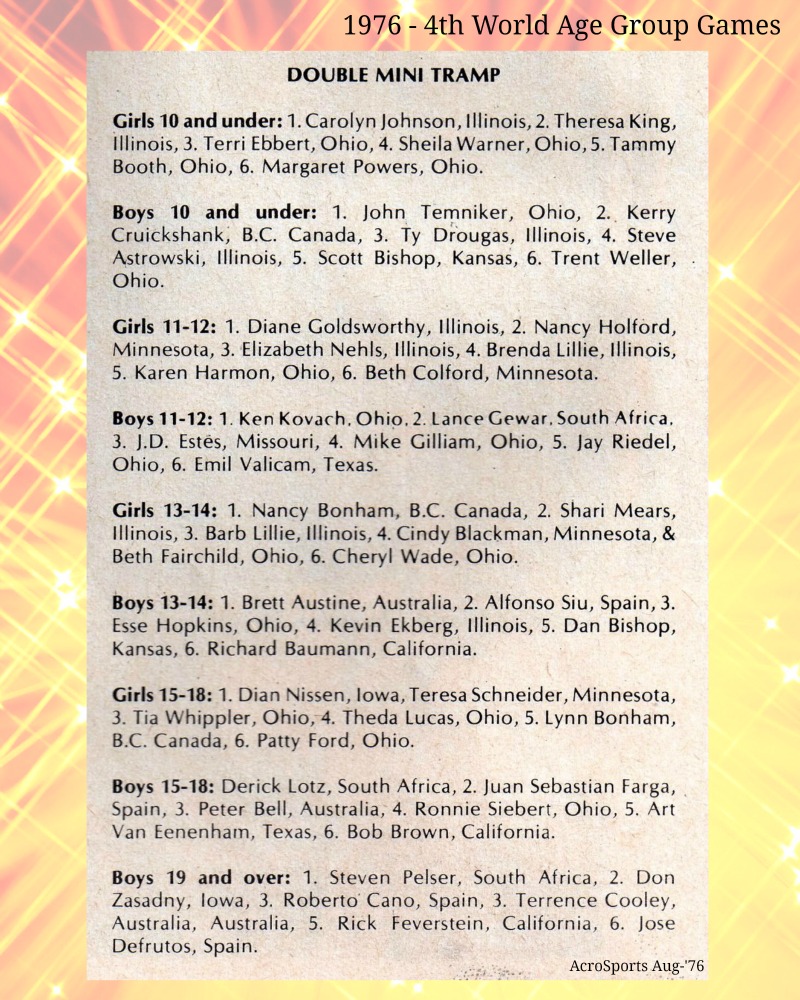 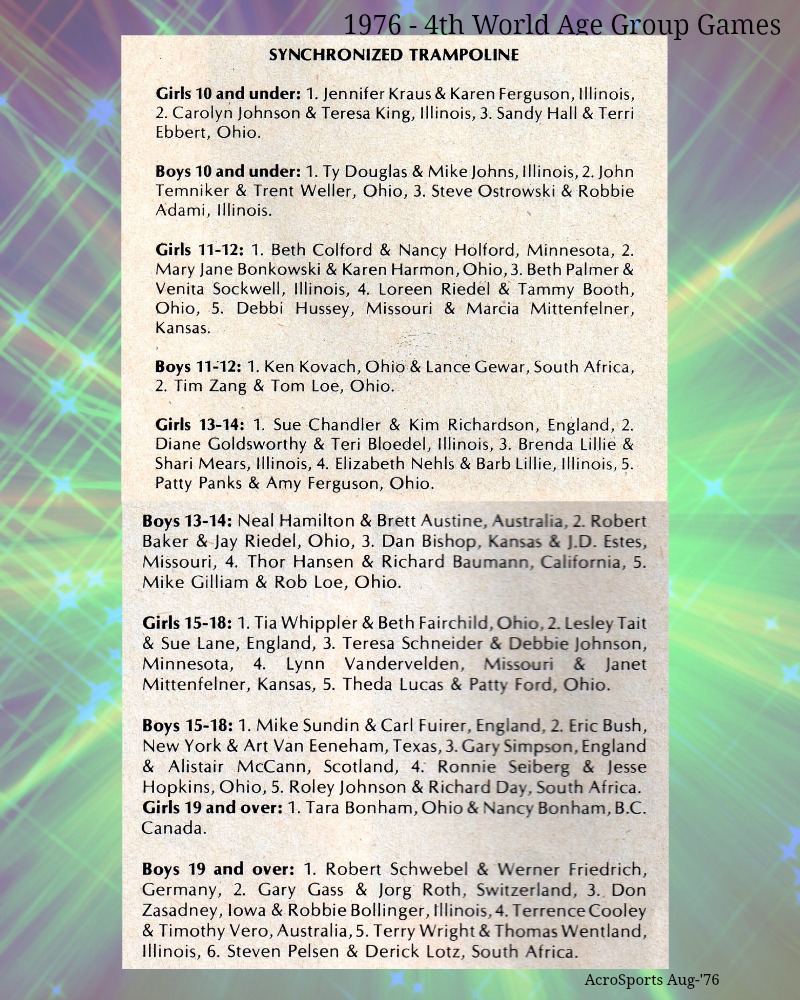 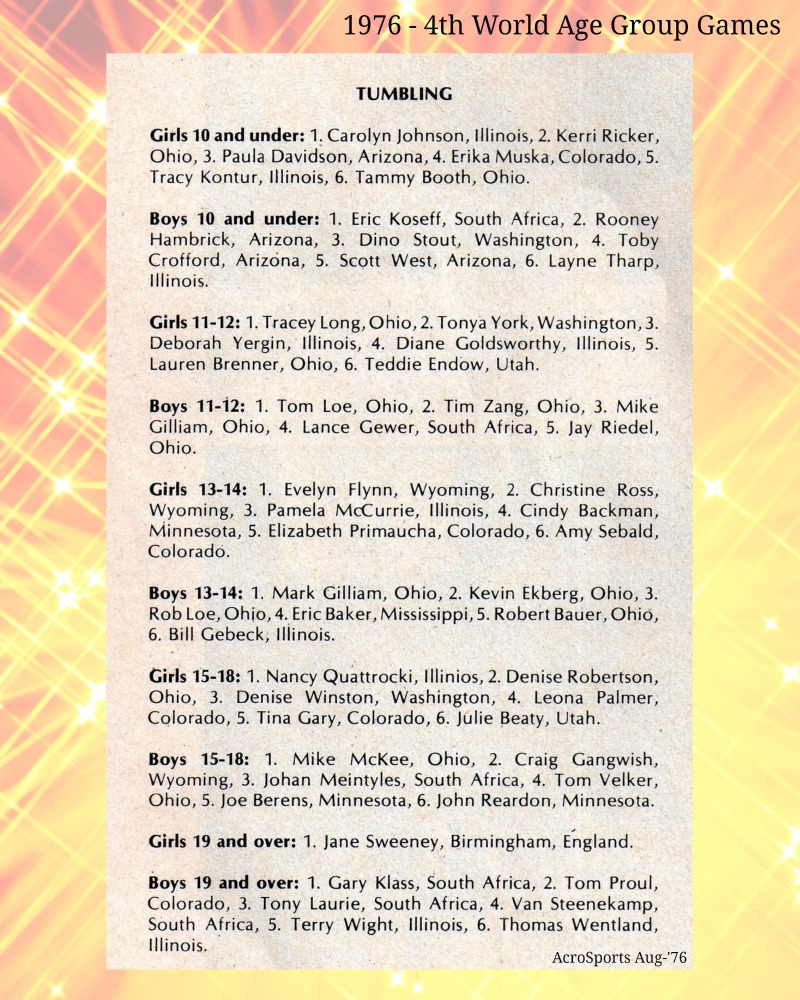